How Candidates and Interviewers Can Communicate More Effectively 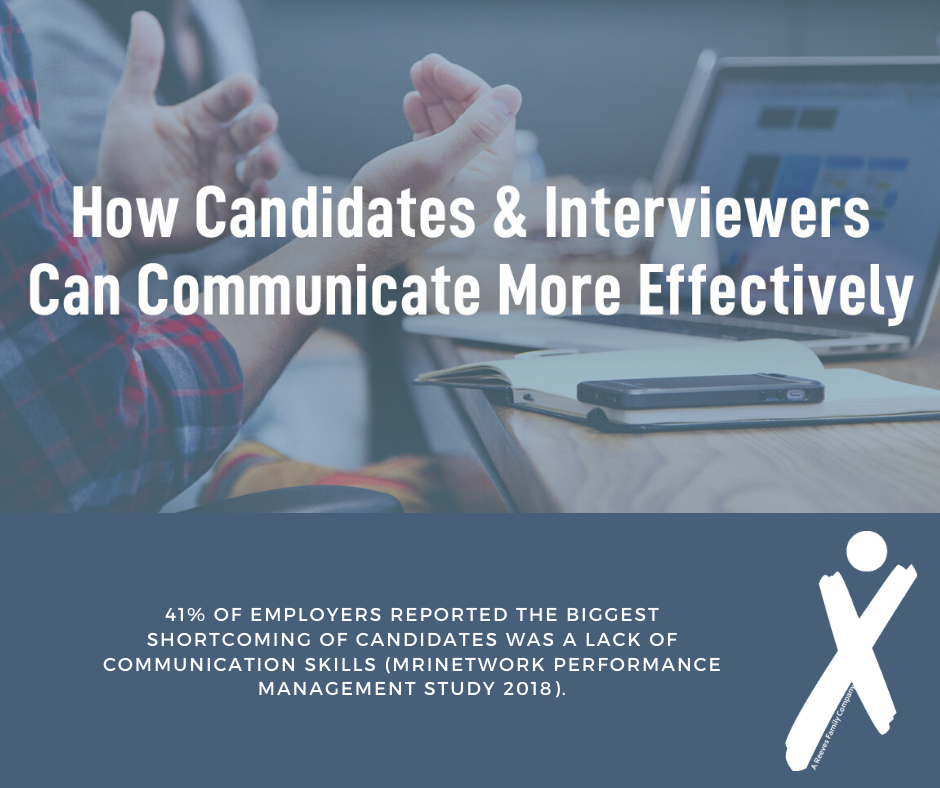 Effective Communication between Candidates and Interviewers is Key

The job interview is the first opportunity for job candidates and employers to get to know one another in person. It’s a critical step in the recruiting process because it gives employers the chance to learn more about a candidate’s strengths and weaknesses, while also enabling the candidate to see if the job they’re applying to is the best fit.

However, when these initial conversations don’t go as planned, both candidates and employers point to the same issue as the primary cause:  poor communication. That’s according to recent data revealed in the 2018 MRINetwork Performance Management Study. When employers were asked to identify the biggest shortcomings among candidates they’d interviewed, a lack of communication skills (41%) was the most commonly cited response.

Notably, when candidates were asked a similar question – What are the greatest gaps or short-comings of companies where you’ve interviewed most recently? – they also cited bad communication, particularly after final interviews, as the biggest problem of all (according to 36% of the individuals polled).

To communicate more effectively during interviews, here are tips that both candidates and interviews can leverage:

1. Explain yourself during the interview process and be authentic when doing so.

“Be you from the start. Interviewing is a two-way street. The organization wants to see if you are going to be the right fit. Take advantage of the interview process to see if the organization is going to be the right fit for you, as well. The only way you will know it is a good fit is if you are your authentic self. Make sure you can bring your whole self to work to ensure that you can be most effective in your new role,” according to Forbes. This applies to both the candidate and the interview.

For candidates:  Talk about your skills, experiences and abilities as accurately as possible. Don’t lie in any way as that will be evident to the job interviewer and can likely come back to haunt you in the future. Instead, tell stories that express your abilities and your interest in the company you’re applying to in a genuine way.

For interviewers:  Don’t sugarcoat the position or the company in order to win over candidates. Instead, be real about the job’s responsibilities, the company culture and what’s needed from a candidate to be successful in the position.

2. Do your homework and let that come through in the job interview.

Candidates:  For job candidates, you should feel prepared by researching the company and interviewer(s) as much as possible ahead of time. This will allow you to answer questions and speak confidently. Asking questions is another important way to communicate interest and being naturally inquisitive about the direction of the company demonstrates a strong sense of engagement for the position.

Employers:  Job seekers devote time, money and energy into establishing their credentials and their work experience. Their dedication deserves recognition. As an employer, you should come to the interview having looked over the candidate’s resume, and at least a few questions to probe deeper into the applicant’s background. Asking questions about certain aspects of their education and/or experience can show genuine interest in their expertise and serves as positive affirmation that they are being considered for the role.

3. Make sure that you stay in touch after an interview concludes.

Candidates:  Sending a thank you note is not only courteous, but it shows that you’re highly interested in the job for which you’ve interviewed. Enthusiasm is a crucial component of landing a position. Around 37% of employers in the MRINetwork poll referenced lack of enthusiasm about the job as one of the top shortcomings among job seekers they’d evaluated.

Employers:  Not knowing whether they got the job can be unnerving for candidates, especially when they feel like the interview went well. It’s also disrespectful of the time and effort the applicant has invested. Try to keep them in the loop even if you don’t extend an offer. Approximately 1 in 3 candidates in the poll cited little to no communication after the interview as their biggest frustration.

In sum, communication is a two-way street during job interviewers. By being authentic and doing research, conversations between candidates and employers will be more effective and lead to stronger hires and better job fit in the long run. Unemployment remains low and companies are scrambling to fill open positions. As a candidate, that puts you in a great position to negotiate more during the offer stage and ensure your needs are met before accepting.