Accepting a Counteroffer May Not be a Good Idea 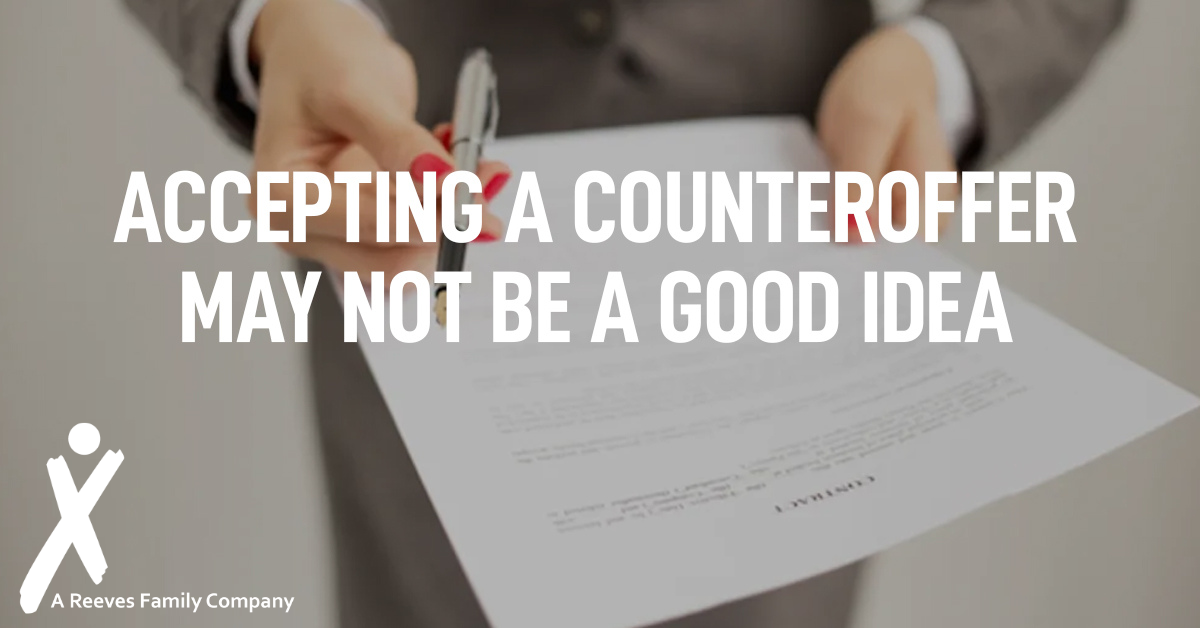 Why Accepting a Counteroffer May Not be a Good Idea

When you’re just about to accept a strong job offer from an exciting new company, you may run into an obstacle:  Your current place of employment doesn’t want you to leave and is offering you a counteroffer. As many industries struggle to find the qualified candidates they seek, businesses are increasingly fighting to retain key staff members by making counteroffers. However, just because they’re willing to do so doesn’t mean it’s in your best interest, a truth that you should consider if faced with this situation.

In fact, almost 70% of employers say they’re likely to make counteroffers to valuable employees in an effort to encourage them to stay put, according to findings from the 2018 MRINetwork Performance Management Study.

However, that doesn’t mean it’s the right move to accept a counteroffer. After all, if an employer is offering you more money to stay, they may not change much else about your current role (and then you’ll be left with the issue(s) that drove you to leave in the first place). And employers who make these offers often do so begrudgingly.

It’s never an easy task, however. “It takes a lot of guts to quit your job. Often it means stepping into the unknown,” according to CNBC. “So, it’s not surprising that it can be tempting to stick with the status quo, especially if your boss promises to up their game — and possibly your salary — in a counteroffer.”

However, numerous career experts suggest it’s never a good thing to do for your career. If you find yourself in this situation, here are some reasons why counteroffers typically do more harm than good:

A counteroffer is just a temporary solution.

Much like a Band-Aid on a severe cut that requires stitches, counteroffers mask the underlying reasons why employees want to leave. According to Forbes, you should never waver on your decision to leave your job, especially for a counteroffer.

“You took the time to identify your reasons for leaving. You worked to fix all the issues that were within your control. There were issues that weren’t fixable and these were your deal-breakers. Because you couldn’t change the deal-breakers, you found a new job that was a better match to your career goals and aspirations.”

– Lisa Quast,  Why You Should Never Accept A Counter Offer When You Resign, Forbes

Bridges may be burned even after accepting an offer.

Another reason not to take the counteroffer? Things can become awkward if you stay at your old company. After all, leadership now knows that you weren’t happy in your current position for one reason or another. Even though they’re signaling that they want to keep you at the company, it could be difficult to make amends in the future and show commitment.

Counteroffers are a clear indication that current staff members aren’t happy in their current roles. As a result, business owners may feel they can’t trust that person quite like they used to, so whatever reasons he or she had for seeking alternative work arrangements may never be addressed due to resentment.

Employers’ hands may be tied.

There’s no denying that it feels really good to be wanted, particularly in business settings. Counteroffers show, at least on the surface, that your current employer doesn’t want you to go. While this may be true, it’s important to keep in mind that there may be more to these offers than meets the eye.

For example, hiring new workers drains company resources. Forbes notes, there are high costs to replacing employees who have recently quit. “Off-the-shelf estimates are available, which might set the cost of an entry-level position turning over at 50% of salary; mid-level at 125% of salary; and senior executive over 200% of salary,” according to the publication.

In sum, accepting a counteroffer is simply not a good career move. While it may seem enticing to get more money from your employer, it will not solve the issues that inspired you to job hunt in the first place.